One of the most technologically advanced nations in the world, Japan, holds some of the most historic and cultural structures that are so focused on the preservation of the natural world. Within Japan, the line between nature and man made architecture has been blurred since the beginning of Japan’s history. The buildings are constructed with the thought that they are not simply places of sanctuary from the external elements but as an addition to the present environment. Many of the places share and exemplify the main characteristics of traditional Japanese architecture. The first being the main material for these buildings are commonly wooden. Wood is used over stone like many other civilizations on it’s compatibility with Japan’s harsh environment. In the face of Japan’s natural challenges, such as typhoons, earthquakes, high humidity, wood is allowed to provide a resilient space while having proper ventilation to beat the humidity. Wood is often not painted in older japanese layouts in respect to nature by not coating wood’s natural beauty. Secondly, an important element would be the roofs. Elongated roofs that have a curved end is one of the most iconic features in Japan’s architecture. Next, would be the Shoji and Fusuma, which are the moving screens and sliding doors. Shoji are wooden frames with a thin screen allowing for light to pass through. This also lets there be shadow figures that can be seen through the screen. Fusuma are the opaque paper that do not allow light to shine through. In most places these screens are what divide rooms and areas in a minimalist and clean way. One way one may consider these architectural features to be related to nature is that in residences they use the natural sunlight to light up homes. That is why shoji is translucent. Using sunlight as a source of light is the same in every beginning culture but Japan was truly using their resources to their advantage. Along with the walls of a traditional Japanese building, there is also traditional flooring. This type of flooring is called Tatami. Tatami are mats made from rice straw and soft rush with cloth edges. What’s important to observe is that since it is commonly made from the plant rush there is also a tradition of taking off one’s shoes so as to not tarnish the material that provided them a soft floor. Outside of the interior of the house there is usually an Engawa. Engawa is an edging strip of flooring much like a porch. This lets people sit peacefully and enjoy scenes of nature while perhaps drinking tea, meditating/finding clarity, or simply to enjoy the view. Engawas are another way that Japanese architecture highlights the beauty of its surroundings. One last feature of that in ancient Japanese architecture is the Genkan which is where a person would set their shoes before entering any building.

Other observations about the connection between Japanese structures along with nature can be somewhat varied between the function of the architecture itself. While looking at the proceeding examples of Japanese construction there are considerable differences between whether the structure was intended for political or religious purposes. For political areas there are designated areas of nature so as to still have a sense of peace and tranquility. Whereas in many religious, especially Buddhist, shrines/temples they are a part of the scene not just a man-made smear on the natural world. Nevertheless, all of the ancient Japanese architecture sites have a harmonious relationship with nature as they try to work with the environment, not fight against it. These original constructs are not created to be individual objects in a place, but instead be a part of the existing territory.

Every 20 years, this building is taken down and rebuilt like a phoenix burning from its ashes. This process has historically been happening for around 2,000 years to display the structure’s vitality and strength that defies time with its image. The Emperor ordered his princess, Yamatohime-no-mikoto, to seek the most appropriate place to permanently enshrine and worship Amaterasu-Omikami during the 11th Emperor Suinin.  Later on, the princess received a revelation that Amaterasu-Omikami should be exalted and honored eternally in Ise after searching in many places.

Ise shrine’s architectural style is known as Shinnei-zukuri, which is characterized by extreme basic and simplicity; its basic style date back to the Kofun period.  Like many important architectural structures in Japan’s history, this building is raised off the ground. The shrine is built of Japanese cypress. And the roof is made up of thatched red with billets. The chigi, which are distinctive forked finials, on the roof of the Naikū are flat on top to create a distinction for the gender of the deity being represented for the female deity Amaterasu. These roofing styles interestingly predate Buddhist architecture in Japan. The Ise shrine is a pinnacle of ancient Japanese architecture that is standing today. 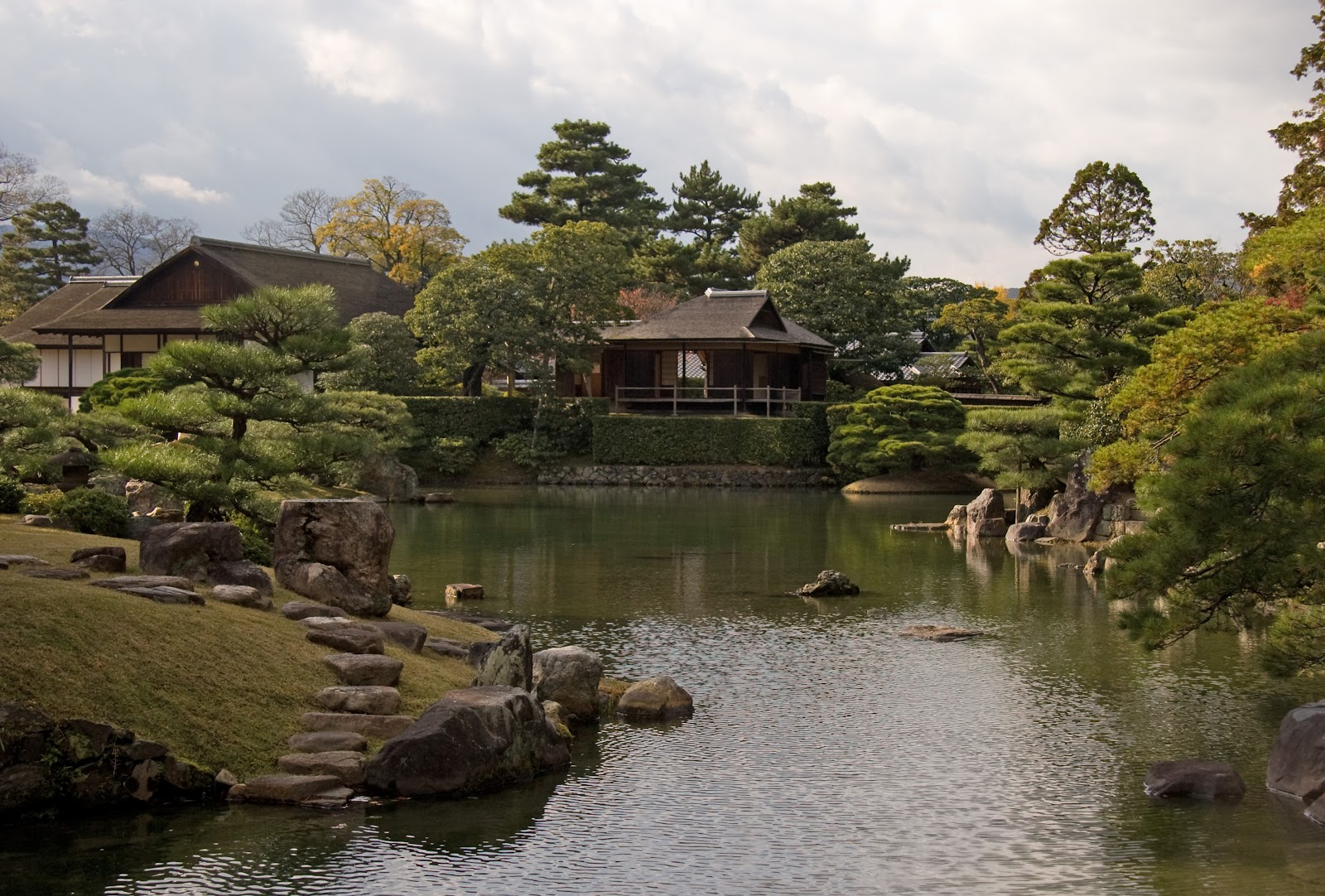 This photograph depicts the Katsura Imperial Villa located in Kyoto, Japan. In the early 17th century, the estate was originally meant to be a prince’s complex. Along the Katsura River the estate covers about 16 acres of space filled with multiple pavilions, gardens and tea rooms. The estate is surrounded by bamboo fences and hedges. The main buildings form the typical shoin-style building in echelon, intersecting roofs, and freely organized interior spaces. The high wooden posts supporting the chu-shoin and shin-shoin are necessary to maintain the floor level throughout and to preserve the land that the villa was originally built upon.

The Katsura Imperial Villa, like much of late Buddhist architecture, is both sacred and secular. Its design and style reverts greatly to the foundations of Zen Buddhism. The entire construction was built in mind to exude the same Zen Buddist divinity that was widely popular in Japan at this time. This implores the use of architectural methods that properly preserve and use the environment around the structure to create a more harmonious setting. The most innovative structure on this site is the large villa. Around the lake, many gardens are designed to gently mold into the scenery. The gardens are oriented to pull off glorious views of the landscape and more specifically the moon over the lake from within the villa. Nestled in the site plan are five teahouses Tea houses are one of the main buildings that are held within the estate. Many ceremonies were held and tea consumed while the residents synchronized themselves with nature. Like Zen Buddhism the architecture that is found in the villa is to grace someone with a landscape to fabricate spatial harmony, and influence peace of mind.

The Ñijo castle is perhaps one of the starkest representations of the power of the Shogun or warlords that once held control over the emperor during the Edo Period. The layout of the castle majorly consists of the two concentric circles bordered by walls and their respective moats. A bridge that connects the Ninomaru Palace, the Shogun’s residence, and the audience area to the Hanmaru enclosure and Katsura Palace. The Ninomaru Palace consists of five individual buildings joined by corridors. These buildings express traditional Japanese architecture known as Shoin-zukuri. Shoin-zukuri is a style of Japanese residential architecture used in the mansions of the military, temple guest halls, and Zen abbot’s quarters of the Azuchi–Momoyama, and Edo periods. It forms the basis of today’s traditional-style Japanese house. This style of architecture can be analyzed by the asymmetrical layout and of masses that make a more compact home.

That asymmetrical design of clumping the interior buildings allows the rest of each space to be filled by traditional Japanese gardens. The Ninomaru Palace is attached to parks on the eastern side. Gardens were designed by Kobori Enshu, a celebrated landscape artist, in preparation for Emperor Go-Mizunoo. This garden includes a large central island with two smaller islands, each representing a crane and turtle, symbols of good fortune. The other garden runs along the north of both palaces and contains two teahouses for the purpose of the Japanese Tea Ceremony, where many official government decisions would be made or discussed. Now even though, unlike many Japanese structures, the castle used much stone in the creation of its buildings, most likely as security to external threats, they made a point to add scenes of nature within the walls so that the people may be better connected to the earth and spiritually.

Byōdō-in is a long standing Buddist temple located in the city Uji in Kyoto Prefecture, Japan. Another title for this building is “Temple of equality”. This structure was originally built in 998 as a villa of a high ranking courtier. Later, his son Fujiwara no Yorimichi turned it into a Buddist temple. The structure had been constructed to be a Land of Happiness purposefully placed along the river facing the Asahi-yama mountain. A clear emphasis of Japanese architecture glorifying nature and how important it is in Japan’s everyday life. This delebrite design is a huge factor in the environment that Buddist temples especially are established in. The palace consists of Chudo, left and right wing corridors, and a tall corridor. Its roof is thatched with Japanese cypress bark. It is said that the materials used for the building were the remnants from Momoyama Castle. Wall paintings are designated as the cultural property of Uji City. and like many religiously significant buildings Byodo-in is also raised on wooden pillars so as to not obstruct the natural environment.

One of the Seven Great Temples, Hōryū-ji still stands as the oldest wooden structure in all of history. Like many other temples located in Japan, Hōryū-ji is one devoted to Buddhism. So it is apt to consider Hōryū-ji as one of few prime examples of true ancient Japanese architecture. The present temple is made up of two areas, the Sai-in in the west and the To-in in the east. Within the Sai-n area of the temple there is the sanctuary hall, Kondo, and the 5-story pagoda. In the east portion of the temple sits the Yumedono Hall and contains libraries, dining halls, monk’s quarters, and lecture halls. All main structures are on a stone platform with wooden buildings on top. The temple was struck by lightning and set on fire, thus later being reconstructed which allowed the architect to imply other influences. These influences include the Three Kingdoms of Korea as well as Chinese influence through Baekje. Chinese influence pertains to the wave of Chinese Buddhism that was introduced by way of the Korean Peninsula. This is also a Korean contribution from the pathways in Japan and China.