When one looks at another country from an outside perspective many things are lost. People assume that the country, as a whole, is one people and culture. However, in most cases, multiple cultures can be seen when looked further into. In terms of Japan, the Ainu people are often forgotten or never even heard of. The Ainu live on the most northern island of current Japan, Hokkaido. They have their distinct language and religion. Their religion focused on the belief that gods, or kamuy, disguise themselves as natural beings and phenomena. The most important religious event for the Ainu is the raising and killing of a bear to the god of the mountain, the kimun-kamuy. The village would steal a cub and raise it as their own. Then in the winter, they would kill the bear with dull arrows to release a part of the spirit of kimun-kamuy to gain the favor of the gods for goodwill. After being imperialized by the Japanese at the start of the Meiji Period (1868), many of their practices, religious or secular, were outlawed.

Though their religion was outlawed by the Japanese, it was their beliefs that influenced how they interacted with their environment, for example, their clothing. The attush robe, a robe made out of elm-fiber, was the most common piece of clothing for the Ainu. It was sometimes made with cotton through trading with the Japanese. When the use of elm-fiber for clothing was outlawed by the Japanese, it was the only material they could use. The elm-fibers have a natural golden color and other colors are achieved with dyes, made with vegetables, or gained through trade.  It was worn for regular and religious events. In each attush robe in this exhibit, common patterns are shared between the three of them. These patterns were passed down through generations from mother or grandmother to daughter, who each designed and created each unique robe for their community. Each robe includes these designs to not only show the owner’s rank and importance but, also, to protect the wearer from an evil god called wen-kamuy. 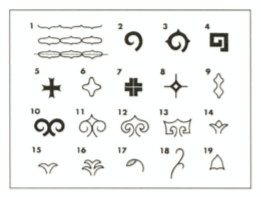 The other two pieces in this exhibit are salmon-skin clothing: a pair of boots, and a coat. Salmon was an important food source for the Ainu and it was an important god, chep-atte-kamuy, or the salmon god. Ainu religion believes that gods hide in the natural world. Chep-atte-kamuy disguises itself as salmon and each salmon killed releases a part of its spirit. To honor chep-atte-kamuy and to not waste anything, they made clothing out of the leftover skin.

The use of cotton and wool would indicate it was made for someone important. This claim would be supported by the intricate, refined design that flows throughout the back of the robe that would take much longer to handcraft compared to the other pieces. The vivid red and dark blue highlights the white design that is symmetrical down the back. The bottom and neckline hem is lined with a floral pattern. While floral patterns are commonly associated with female figures in Japanese culture, it is unknown if this detailed robe is for a woman or a man. The floral pattern could have been placed there due to the women who handcrafted these robes.

Similar to the previous robe, there is a dark blue background with red highlights with a design of one main color. In this case, it is gold and could be referencing elm-fiber, which appears golden. The symmetrical pattern goes along the back, instead of flowing down, it is very angular. The outer parts of the design are very sharp and straight while the inside has curves and spirals into itself. These two pieces offer the question of what qualities of attush robes are associated with each gender. One would assume that this piece was more masculine and the previous one more feminine because of the floral hem.

This robe is made of elm-fiber, the original material for making attush robes. This robe is very simple compared to the other attush robes. It could be that it was made for someone unimportant due to its lack of color and design.  The design is only located around the neck, sleeves, and at the bottom. There are no extravagant colors or dyes used to make this robe special. There is a dyed black material under white lines that are both symmetrical down the back.

As explained in the overview, the Ainu people made clothing out of salmon skin to make use of all the fish, not waste anything. The skin is sewn together in thin strips at the lighter and darker part of the boot. The difference between shades could be from the skin from different colored salmon or different colored scales from different parts of the body. This boot does not have many aesthetic features, rather it focuses more on the practical part of clothing, to protect the feet and warm them during harsh winters.

Similar to the salmon-skin boots, this lacks a lot of aesthetic features that are seen on the attush robes. This piece is most likely meant for practical uses to warm oneself. Again, it is not known whether or not this article of clothing is meant to be worn by a specific gender. However, one can assume that this is made for someone of higher status because of the amount of salmon that would have to be descaled and made into a coat.