By: Matt Giuttari and Zach McCrystal

We set out to compare and contrast different dwelling’s of Japanese Emperors. Our goal was to illuminate the different styles of architecture inherent in two royal abodes, and from that draw connections to larger themes pertaining to why these dwellings differ so starkly from one another. To meet this goal, we chose to juxtapose Shugakuin Imperial Villa with Matsumoto Castle, two royal imperial domiciles during the Edo period.

Shugakuin Villa, located in the hills of the eastern suburbs of Kyoto, Japan, demonstrates the importance of nature in Japanese culture. Built in the 1650s, the Villa is an extraordinary feat of gardening throughout all of Japan. The property comprises three different Villa areas, the Upper, Middle, and Lower. The Villa was constructed in such a way that a body of water can be seen as the central location on the premises. Rather than having water surrounding the Villa for defense purposes, each building on the property surrounds the water for a sense of purity and life. Aside from the main pavilion which is where the emperor would be situated, there are numerous tea houses scattered around the grounds of the property. The tea houses are far from imposing as they are built to be hidden among the gardens and greenery. The Villa exhibits qualities of wabi-sabi (侘寂), which is a world view centered on the acceptance of transience and imperfection, as it is seemingly all natural and not developed strictly for beauty purposes, rather for being able to exist as one with nature. The largest building on the grounds is the Jugetsukan Pavilion which would house the emperor. Though it is the largest, it is far from imposing. The structures were strategically built in order to not deter the human eye and awareness away from the beauty and serenity of the gardens. Single level structures, light colors, and shoji walls that open to the outdoors are all elements of the architecture which create a soothing experience. This provides the emperor with a relaxing escape from the frantic life in the castle.

Conversely, Matsumoto Castle exhibits grand architecture that diverts attention away from nature. Originally known as Fukashi Castle — and also known as Crow Castle due to its black exterior — Matsumoto Castle exists as one of Japan’s premier historic castles. It was completed in the late 16th century after a series of additions onto the existing castle The castle was originally built by the Ogasawara clan, but soon was captured and taken over in a siege by the Takeda clan. During the Edo period, the castle was the seat of Matsumoto Domain under the Tokugawa shogunate, and is located in the city of Matsumoto, in Nagano Prefecture. Immediately, one can notice the raised foundation style that the castle employs; by raising the castle’s foundation to such an extreme extent, the castle is afforded protection from siege while also being placed on almost a pedestal for all to see, focusing viewers’ gaze on the architecture rather than its surroundings. Additionally, the combination of using a black exterior coupled with the regal, detailed style of the castle’s architecture creates an imposing image that demands attention. Similarly, the landscape of Matsumoto Castle as well as its interior further support the intention of having onlookers/inhabitants focus on the castle itself rather than its surrounding natural environment. Unlike Shugakuin Imperial Villa, which mutes the architecture within to emphasize the significance of nature and spiritual meditation, Matsumoto Castle displays an intricate while luxurious interior coupled with an almost barren landscape to accentuate royal power, wealth, and prominence of architecture. 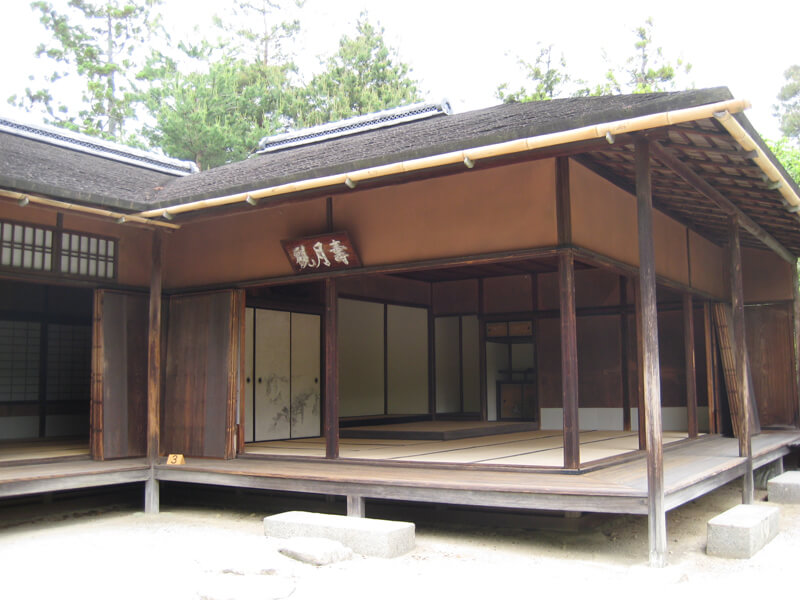 Description: This photograph displays the main pavilion of the Shugakuin Imperial Villa. The Jugetsukan Pavilion, situated in the lower Villa, would house the emperor when he is enjoying his peaceful visit away from the castle. In the interior of the pavilion, which is easily visible and wide open to its natural surroundings, we can see traditional Japanese features such as a shoji walls and tatami mat flooring. This pavilion demonstrates the simplicity of Japanese architecture as it is nearly an entirely wooden structure. Also, this pavilion is constructed to be seen as one with nature and does not take away from the beauty and essence of nature in this Villa. The soft, calming color choices along with the simplistic, straight lines of the pavilion truly let the guest admire the natural surroundings and feel as if they are one with nature during the stay at the Villa. 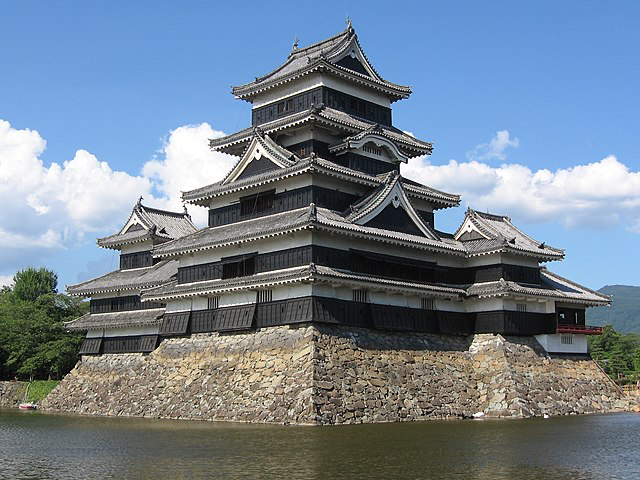 Description: Looking at the castle, we can see that it features a raised foundation to an extreme extent; this aspect both provides the castle with a tactical advantage when under siege, and also places the castle on somewhat of a pedestal for all to see, focusing the viewers’ attention on the architecture rather than the landscape. The height f the six stories of the castle combined towers over 30 meters high. Additionally, the main site of the castle is about 150 square meters, and is surrounded with moats 20 to 50 meters wide. Additionally, the combination of using a black exterior coupled with the regal, detailed style of the castle’s architecture creates an imposing image that demands attention. 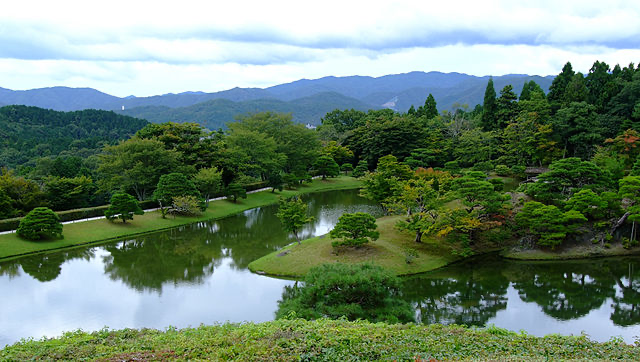 Description: Similarly to the Katsura Imperial Villa, the Shugakuin Imperial Villa maintains a central body of water which is imperative to the design. Rather than having a body of water surrounding the property, like a moat does at Matsumoto Castle, the body of water at the Shugakuin Imperial Villa is the focal point and central piece of the property. The striking part of this image is the fact that there is a teahouse in the photo that is almost hidden on the right side. There are smaller buildings within the nature surrounding the body of water, however, they are not imposing or monumental by any means. There is a sense of wabi-sabi, a sense of beauty in imperfection, in this Villa because it is all natural (nature is never perfect which is the beauty) and there is beauty in the gardens and trees rather than perfectly sculpted architecture and straight lines everywhere. 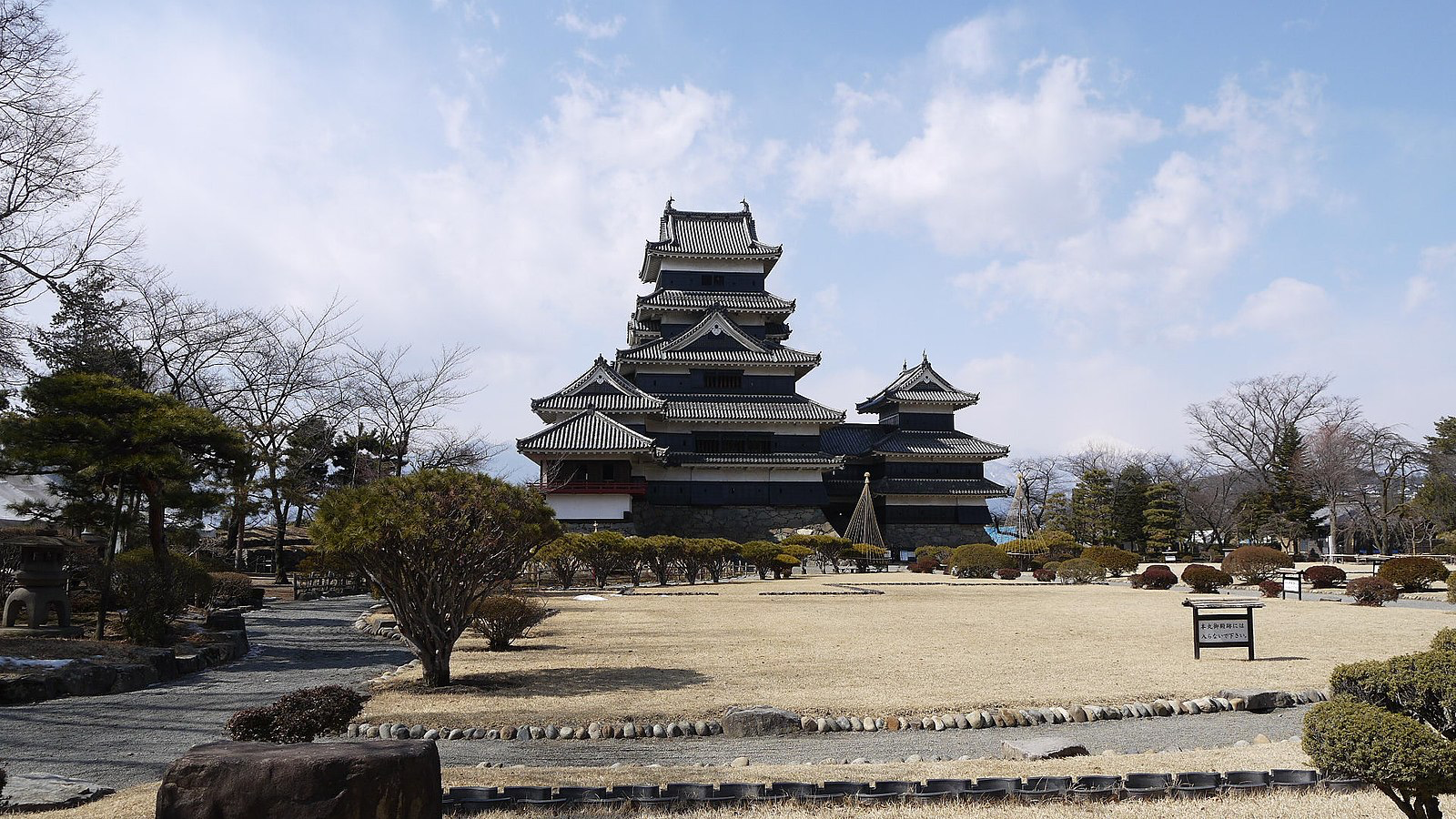 Description: Looking at Matsumoto Castle’s landscape, we can see that the castle exists as a “hirajiro,” or rather a castle built on plains rather than on a hill or mountain. The castle is unique for having both a secondary donjon, which is the innermost fortified keep and area of a castle, and a turret adjoined to its main keep, again creating a sense of prominence when viewing the architecture. Although the image here does not feature the surrounding nature in bloom, the landscape of Matsumoto Castle still fails to compete with the grandeur of the castle’s architecture. Instead of using architecture as a background to the natural surrounding environment as in Shugakuin Villa, the architecture featured in Matsumoto Castle takes center place and diverts all guests’ attention away from the surrounding environment to instead the castle. 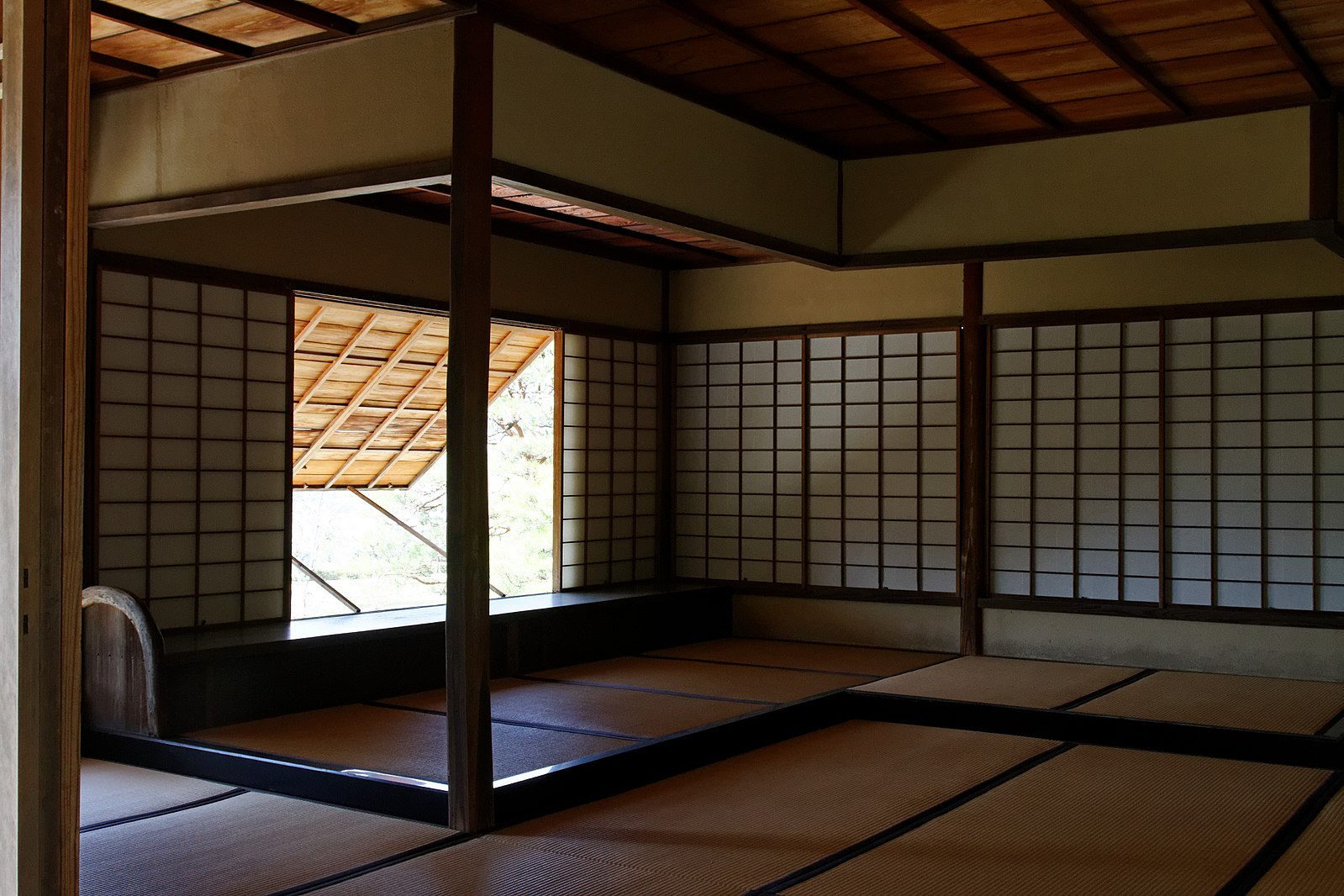 Description: The interior of the Jugetsukan Pavilion, situated in the lower villa, is extraordinarily simplistic and in a sense, lightweight. Everything seen is wooden, which is a stark element of Japanese architecture. There are very few walls in the pavilion, besides the exterior walls. Contrasting with Matsumoto Castle, the pavilion has only one level whereas the castle has six interior levels. Similar to Matsumoto Castle, the entire interior is wooden. Although the exterior architecture and surroundings are vastly different, the interiors have similarities. Elevated tatami mats are seen on the floors and the walls consist of traditional shoji material, which make them able to open to the surrounding nature. As has been stated previously, the pavilion is the epitome of serenity and simplicity which creates the seamless transition from interior to exterior.

Description: The interior of Matsumoto Castle features intricate wooden designs that support the castle’s grandeur theme, but also that provides the castle’s inhabitants with defense options for wartime scenarios. Unlike the interior of the Jugetsukan Pavilion, the interior of Matsumoto Castle harbors six different levels, showcasing the castle’s complex design. The wood used within the castle starkly contrasts with how wood was used in Jugetsukan Pavilion; within Matsumoto Castle, the wood design is not simple nor mute in color, but rather conveys a sense of luxury and opulence through employing glossed-over hardwood floors that retain their natural colors. Additionally, through the use of strategically placed windows, the interior’s design offers inhabitants a tactical advantage during an assault through the use of multiple shooting windows placed at specific angles to protect defenders. 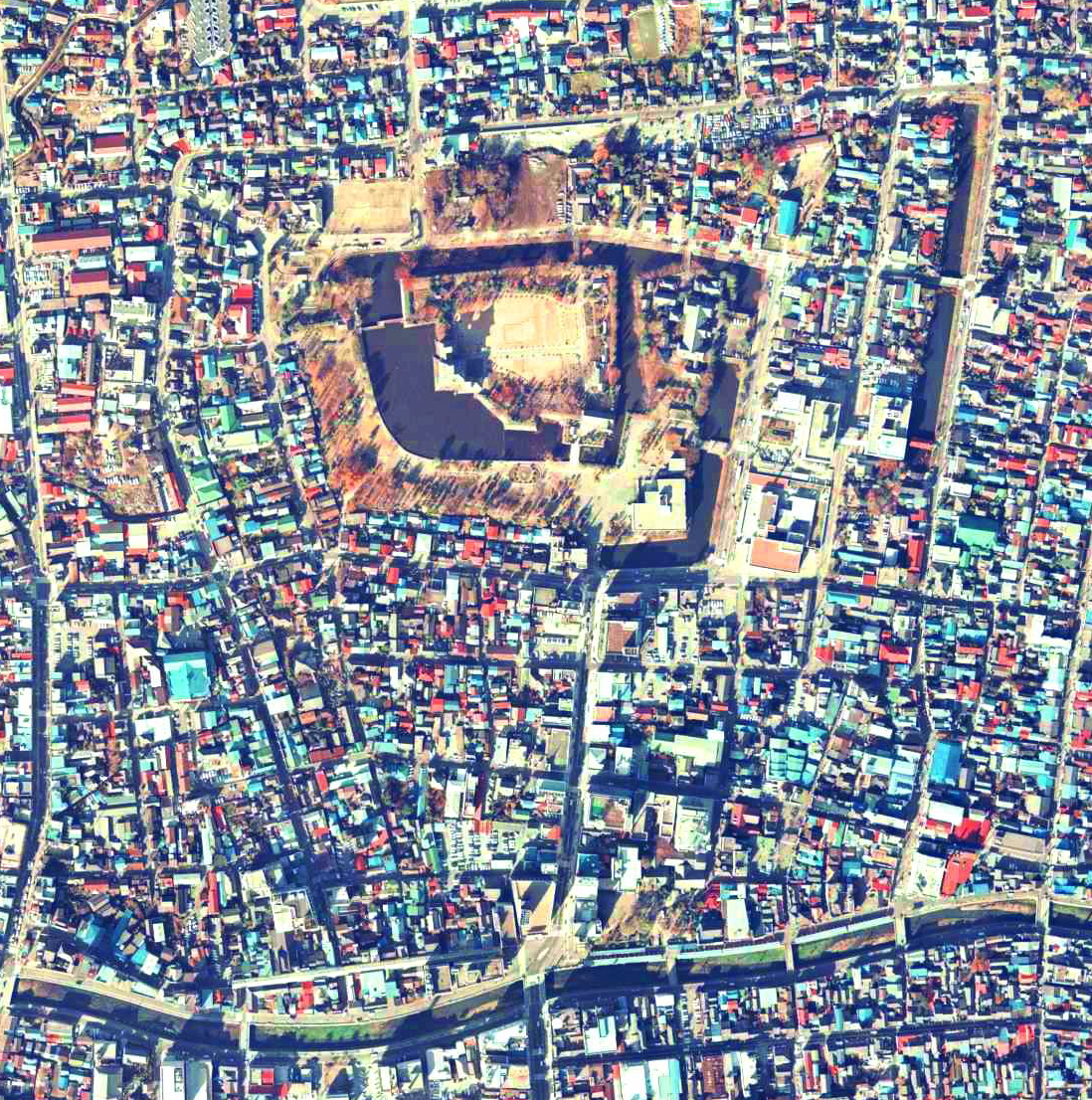