During the Edo period in Japan, which was 1603 to 1867, it was illegal for women to act or even be on a stage. There were many plays with many female roles so the actors had to find a fix to the situation. Their situation came to somewhat of a fix by having some of the more effeminate male actors cross dressing as women to ensure that the woman roles in plays stayed filled so that the show could go on. This same scenario can be seen in most cultures in different forms throughout different eras. Examples are in Ancient Greece, Shakespearean theater, today. There are many other examples but these are the best known ones. In ancient Greece women were also banned from being on stage like the Edo period. In Shakespearean theater women were still banned so prepubescent boys in theater would play the roles of women. The reason for young boys playing women instead of adult men was due to their voices not changing yet and they don’t have as much muscle tone which means they can pass better as a typical woman of the time. Today’s form of cross dressing in theater is known as drag. It takes place on social media, in bars, clubs, theaters and on television. Drag is the art of dressing as a different gender than the one that one identifies as. These instances of cross dressing throughout time show how other people view a particular gender identity. While it is sometimes overdone for comedy or mockery, it is still a good window into what perceptions were at that time. This “window” into the perception of gender during the Edo period was captured in Japanese woodblock prints with women and male actors presenting as female for their roles. This exhibition shows four woodblock prints of male actors and one woodblock print of a woman who is presenting as a typical woman in her era. The male actors are all shown in their costumes and all look very similar to the woman. The interesting thing is that the male actors and regular women are almost indistinguishable from each other. In other cultures the distinction is a lot more prominent and exaggerated. This exaggeration is usually done with makeup or body padding. The only difference portrayed that an untrained eye could notice is that with some of the male actors have a jawline, that same kind of jawline is shown on the old man in the background of “A Woman Who Neglects Her Husband’s Parents Invites Criticism”. In the same piece of art the woman doesn’t have the part of the jawline near her ear drawn, just the part near her chin. Other than jawlines and makeup there isn’t any other difference between the woman and the male actors playing women.

Title: A Woman Who Neglects Her Husband’s Parents Invites Criticism

Description: In this print you see three people, a young woman with a musical instrument, a young man with a book and brush, and an old man in the background. The woman seems to be focused on talking with the young man, presumably her husband, and neglecting the old man like the title says. The old man appears to be doing something like knitting with some kind of string. The people are all in a beautiful house. The young couple is sectioned off from the old man with a screen and part of a wall to create a visual distance to show that she is not helping him against what is expected of a woman during that time.

No credit or ID information

Description: In this print you can see a singular woman outside of a building at nighttime and looking distraught. This woman is next to either a fountain or a lantern, is surrounded by white beautiful flowers, trees much farther back and everything in the distance is foggy. This is a male actor cross dressing as a female for a role. You can see in comparison to the first print “A Woman Who Neglects Her Husband’s Parents Invites Criticism”, the male actor passes as a woman very well, the only difference is the make up and the clothes is more ornate. The male actor is seen holding an umbrella and has heels as well. 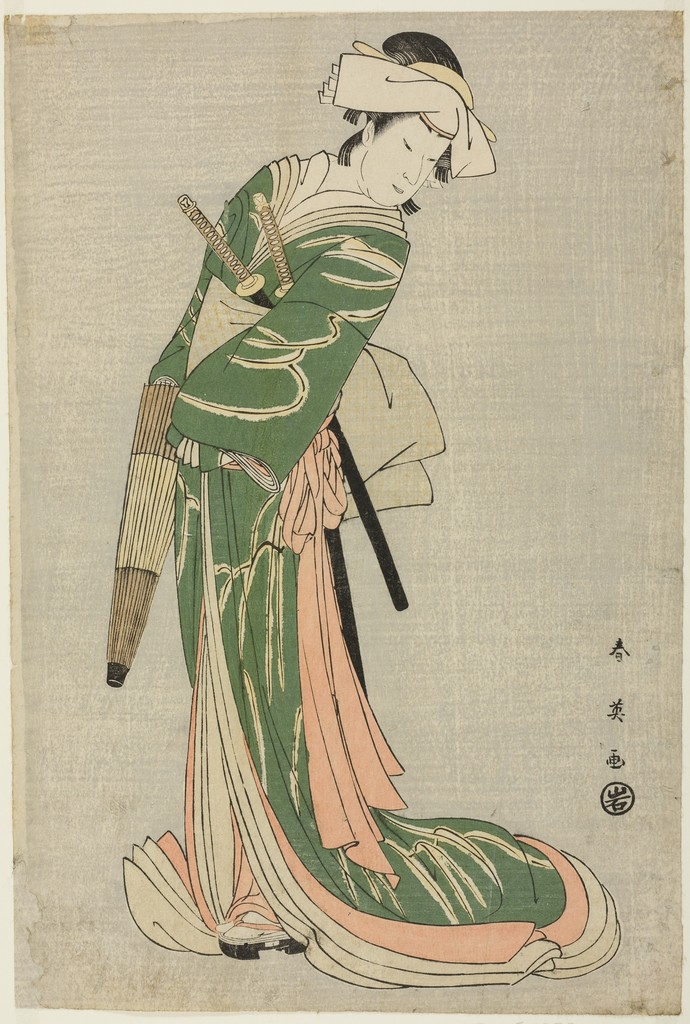 Title: The Actor Nakamura Noshio II as Tonase, in the Bridal Journey Scene, Act Eight of the Play Kanadehon Chushingura (Model for Kana Calligraphy: Treasury of the Forty-seven Royal Retainers), Performed at the Miyako Theater from the Fifth Day of the Fourth Month, 1795

Description: This print shows a young looking woman in a long green and pink dress with two swords and an umbrella standing, there isn’t any background, just the woman. She is actually a male actor cross dressing as a female. He doesn’t pass as a female as well as the male actor in “Lost in Thought” due to her jawline and eyebrows. He also has more natural makeup or no makeup at all. He is portrayed as looking peaceful and satisfied in this print. The background is a simple light blue and gray background meant to keep the painting looking complete and not as plain.

Description: This print shows a bunch of actors on the stage, the male actors playing females are the two bigger people, the smaller person is a child. The print’s surrounding features are the theater and the people in it, there are about one hundred and seventy people in the theater, each has something unique about them, their pose, their look, their hat, even their facial expressions are different. The male actors are both wearing dresses, the one on the left is wearing a red dress and makeup, the one on the right is wearing a black dress and not any makeup that is visible.

Katsukawa Shun’ei. (1790-1800). The Actor Nakamura Noshio II as Tonase, in the Bridal Journey Scene, Act Eight of the Play Kanadehon Chushingura (Model for Kana Calligraphy: Treasury of the Forty-seven Royal Retainers), Performed at the Miyako Theater from the Fifth Day of the Fourth Month, 1795. Retrieved from https://library.artstor.org/asset/AMICO_CHICAGO_1031150148

D’Almeida, Monique A. “From Jokun to Onnagata – Hawaii.” FROM JOKUN TO ONNAGATA: PERFORMANCE, AESTHETICS, AND THE CULTIVATION OF FEMININITY DURING THE EDO PERIOD. UNIVERSITY OF HAWAI‘I, May 2017. https://hawaii.edu/art/wp-content/uploads/2017-DAlmeida-compressed.pdf.