The intention of this exhibition is to explore Japanese ideals about aesthetics through the appearance of Wabi Sabi in the Japanese Chashitsu, which is a tea house where traditional tea ceremonies, or Sado, are held. In Western culture, is it most often thought that aesthetics are something that one can view, that different notions of form and style inform the architecture of structures. Wabi Sabi aestheticism deviates from this notion in that it is not about style, but rather entirely about movement. Reflecting on the purpose of Sado, it is intended as a quest for beauty and truth that is achieved by acting aesthetically. Wabi Sabi became associated with tea houses around the 16th century when leaders were fighting for prosperity and power. In spite of this, many Japanese people became interested in enacting a lifestyle that was devoid of interest in prosperity, turning towards notions of decay, decline, and all things concealed. They spoke of moving continuously in order to capture the beauty of ephemeral nature. It was important to move slowly and carefully. In tea ceromonies, they followed rules. They must know where to sit, and exactly how to eat. This forced them to be considerate and careful. The tea houses were designed with reflection in mind, rather than decoration. Gardens were kept neat and clean, using hands or simple tools only. Once inside, a simple interior encouraged guests to keep their senses focused, this being achieved by small spaces with intricate lighting, constructed out of simple materials. Often, there would be very few objects within a Chashitsu aside from a flower vase for seasonality. 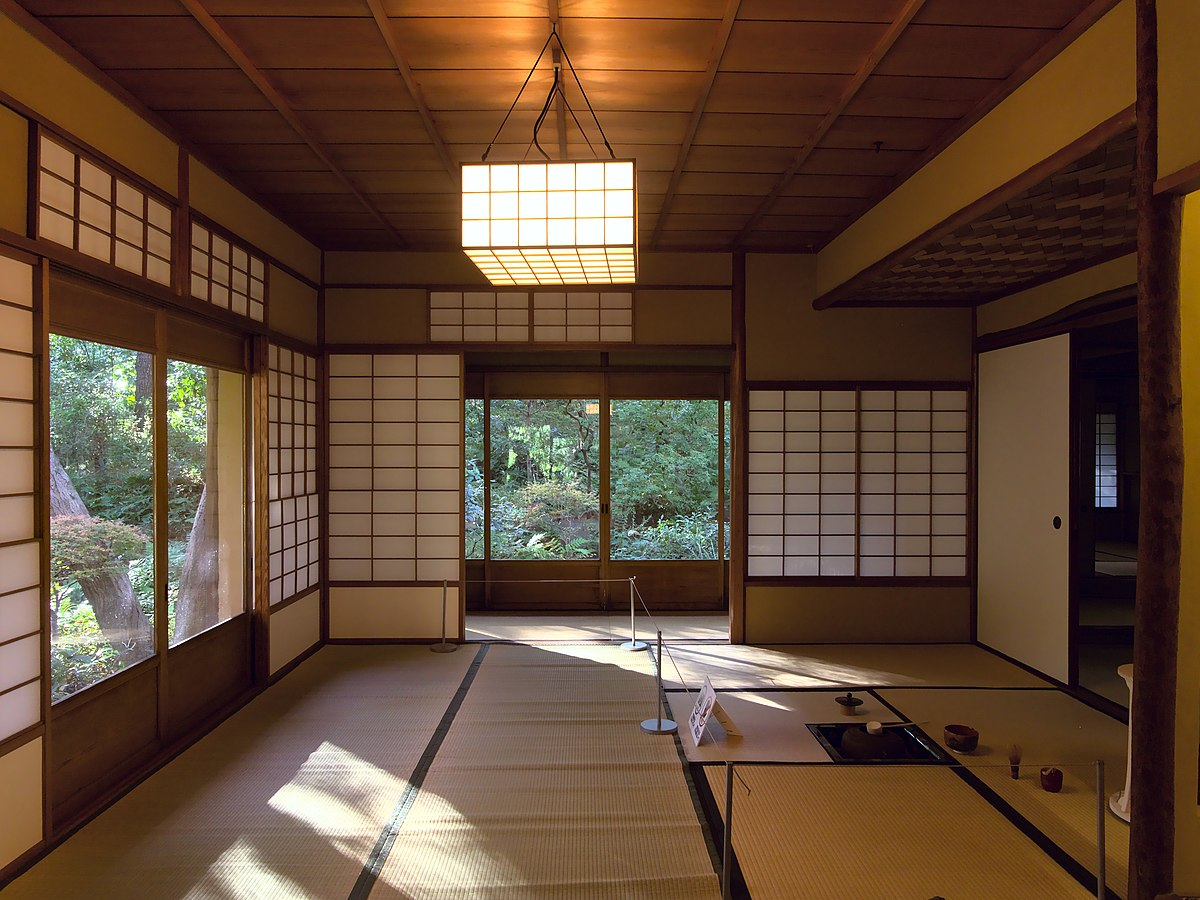 Caption: Interior of the Kōka teahouse in the garden of the former residence of Prince Asaka, now the Tokyo Metropolitan Teien Art Museum, in Shiroganedai, Minato-ku, Tokyo, Japan.

Description: This image shows the simple and delicate nature of the interior of a Chashitsu. There is no furniture because everything is done on the floor in a traditional tea ceremony. A few select objects can be seen that would be used in the tea ceremony. The architecture acts as a guide for meditation rather than a distraction, and the lack of furniture demands precise and careful movement. There is also a great sense of the outdoors, as the surrounding environment is visible through windows. 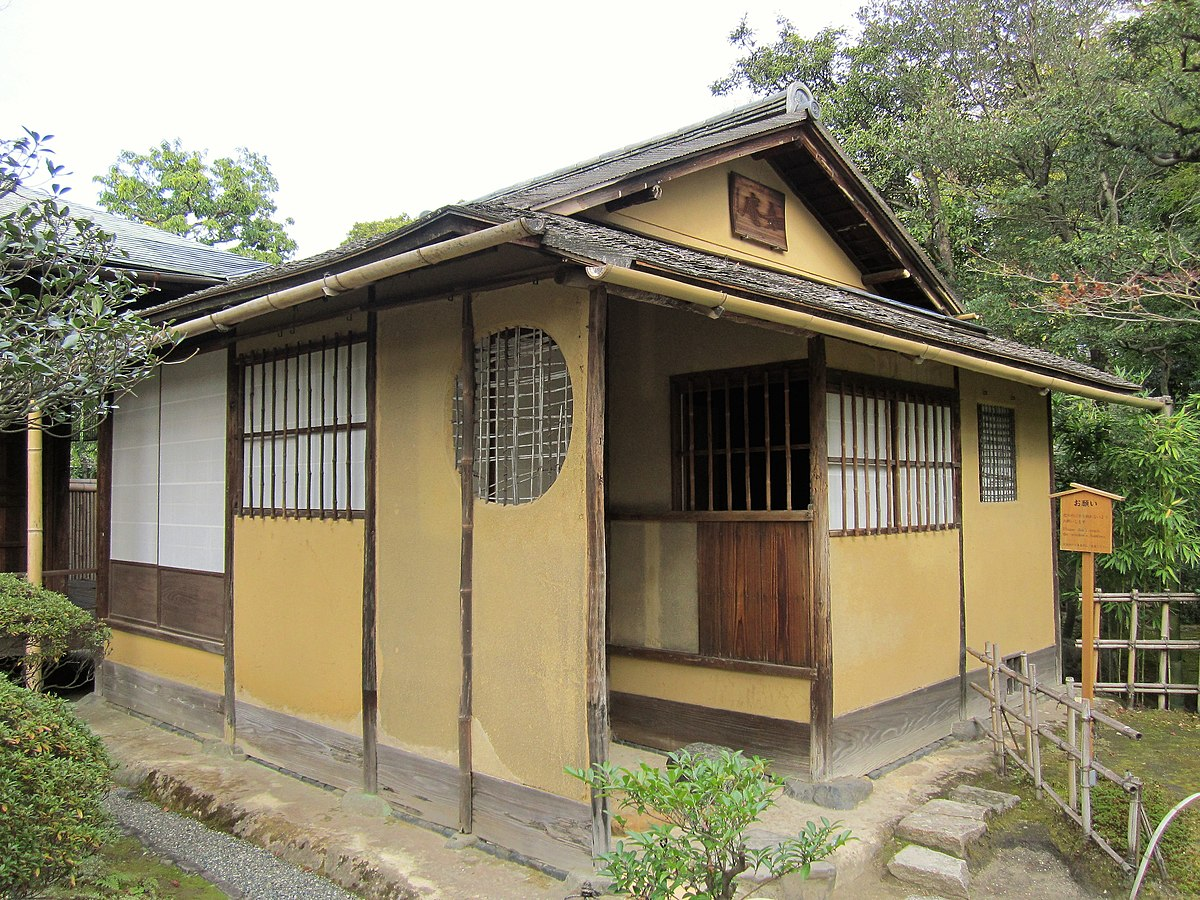 Description: This image depicts the exterior of a traditional Japanese Chashitsu, called Jō-an. This teahouse is notable for its simple construction out of natural materials like bamboo and wood. A crawl-through entrance is visible as a wood panel at waist-height. This depicts the intentionality behind the architecture to promote aesthetic movement through the structure, as one must act carefully and intentionally in order to enter. As well, the structure is considerably small which speaks to the intimacy of tea ceremonies, as only a few individuals would partake at any given time. 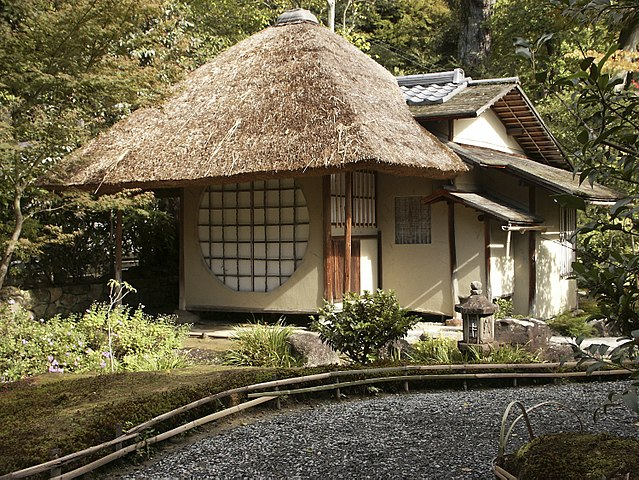 Caption: This photograph shows the Ihōan, a teahouse at Kōdai-ji in Kyoto, Japan.

Description: This image shows another exterior of a Japanese Chashitsu. This one has striking architecture, most notably in the form of an oversized thatched roof. There is also another crawl-through entrance visible. However, the aspect of this structure that is most telling of Wabi-Sabi aesthetics is the multiple roof lines that appear mismatched and even random. These rooflines guide the eye in a poetic sense, moving across the structure and always offering a new perspective. I think it is best to imaging watching rain or snow fall onto the structure, passing from one roof line to another, always in a state of change. 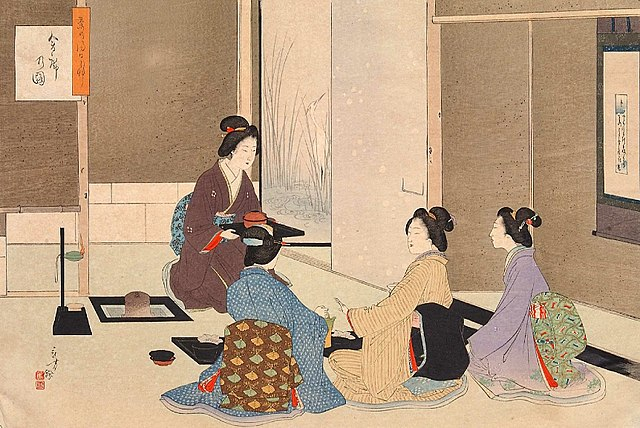 Caption: The host hands a lacquered tray containing a bowl of food to each guest, from the series A Tea Ceremony Periwinkle, woodblock print

Credit line: This is a faithful photographic reproduction of a two-dimensional, public domain work of art.

Description: This woodblock print depicts a tea ceremony taking place. There is a clear host who is passing out food to each of her three guests. There are few objects present except for the items that are used in the ceremony. The door is open to the outside which shows the importance of nature and seasonality as an aspect of the ceremony. It is a small, intimate gathering, and two of the guests seem to be engaged in conversation. Despite this, everyone has carefully placed themselves on the floor before the host and are prepared to follow the rules of the ceremony. This image is important in that it shows that though there are many rules that must be followed in the ceremony, it is not something that is strict and unenjoyable. It is a social and meditative process. 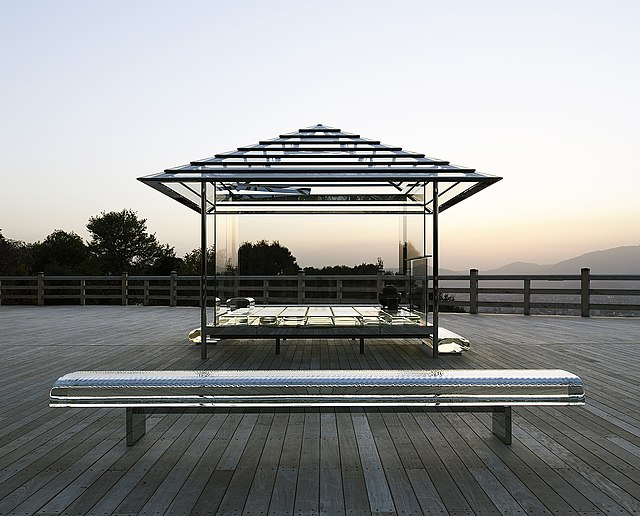 Description: This image shows a contemporary example of a Chashitsu. The architect responsible was interesting in translating and reimagining the ideas of the Wabi-Sabi Chashitsu into the 21st century. Thus, it has been constructed entirely out of glass. Guests are welcome to enter and partake in a tea ceremony, but one can imagine how careful one must be in order to move within the structure and not break anything. As well, the glass allows for panoramic views of the surrounding environment, allowing guests to exist in a closed environment that serves a purpose without it obstructing from the outside world and the gorgeous views that it has to offer.